You’ve heard of root canals, but what makes a retrograde root canal different?

A traditional root canal improves your dental health by mitigating bacteria and decay from the infected area, thus saving and preserving the natural tooth. But, there are instances when another infection develops or lingers after the initial root canal procedure, and this is when a retrograde root canal (apicoectomy) is needed.

If you’re looking to address your dental and need assistance beyond the dentist, the Alaska Center For Oral + Facial Surgery is here to support you. Learn more about a retrograde root canal in today’s post.

What Is A Retrograde Root Canal?

We’ve mentioned how an apicoectomy is necessary after a traditional root canal is unsuccessful, but what exactly is it? Let’s dive deep into the anatomy of your mouth to better explain this oral surgery procedure. 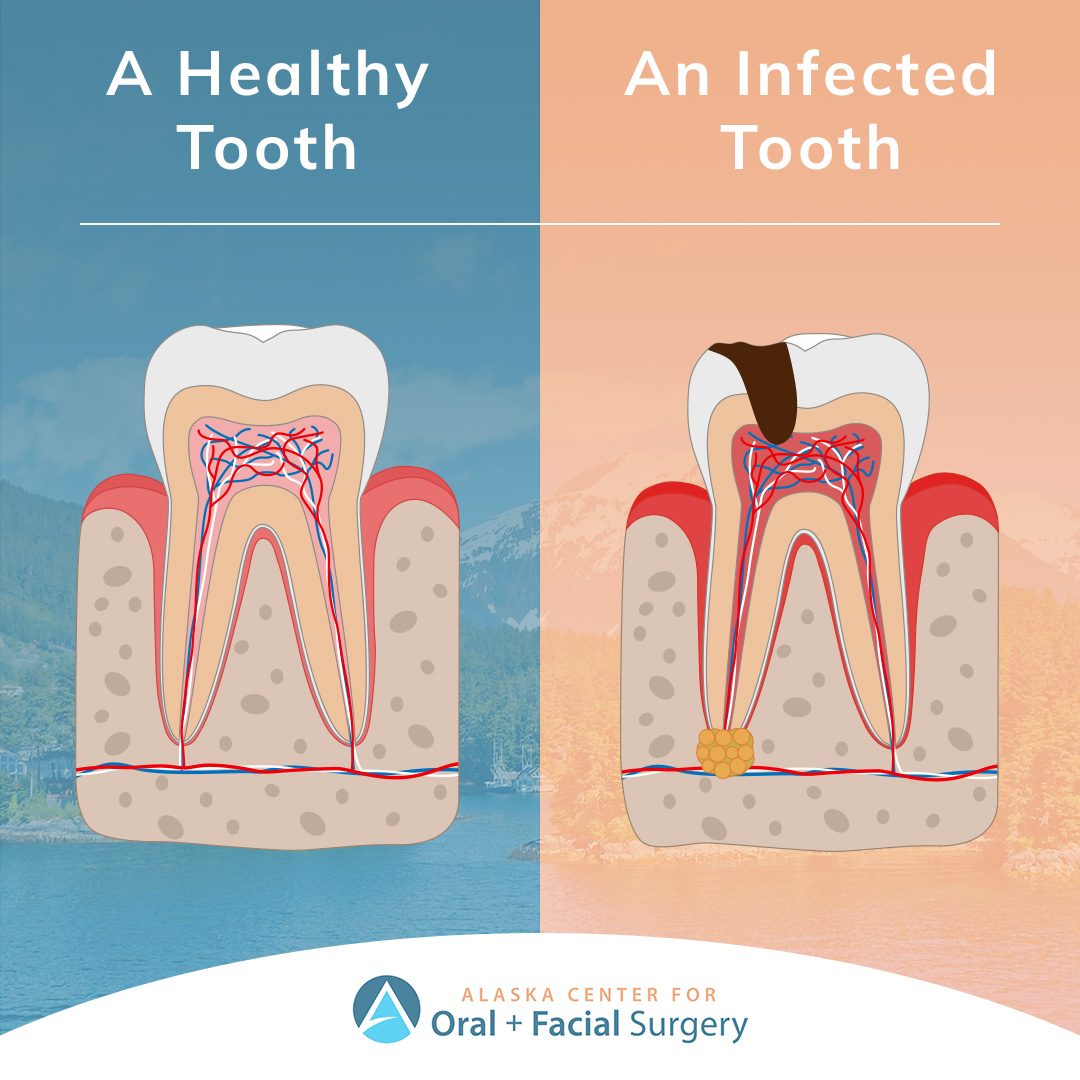 While there are many components that hold your teeth in place, your roots play a major role by connecting to your jawbone securing each individual tooth. Larger teeth such as premolars and molars will have more than one root while your front upper and lower teeth will have just one.

The apex is the very tip of the root that journeys deep into your tooth and eventually reaches the jaw. Blood vessels and nerves enter the tooth through the apex and up into the pulp chamber which resides inside the visible part of your tooth.

A retrograde root canal is warranted when a traditional root canal is ineffective and an infection still remains or another one emerges. While this may seem uncommon, the structure of the root canal is quite complex with a variety of branches that meander from the main canal. So while in the initial root canal procedure removing all of the infection is the goal, because of these branches, small amounts can be left behind. 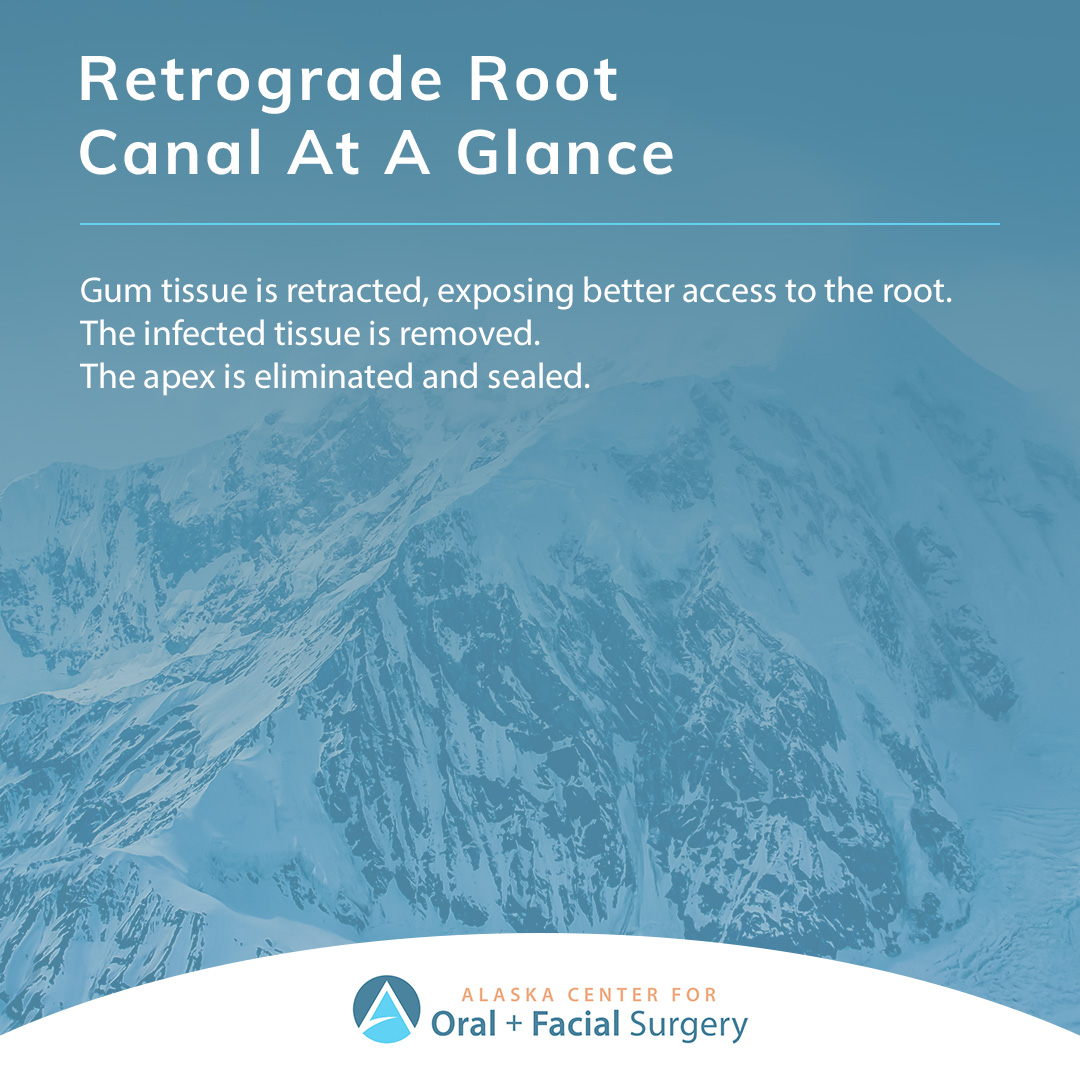 In a retrograde root canal, the apex is removed and sealed to eliminate the chances of another infection in the root canal.

In the initial stage of the apicoectomy, the surrounding gum tissue is retracted and the infected tissue is removed, in addition to the very end of the root.

Next, the tip of the root must be sealed so a small filling is placed at the end of the root canal. Within a few months, the area begins to heal and the bone fortifies around the root.

Why elect for an apicoectomy?

If you’ve had a root canal and you end up with another infection, there is likely an issue in the apex of the root. Because the first course of action is always to save the natural tooth, a retrograde root canal can prevent the tooth from needing to be extracted.

When is a retrograde root canal performed? 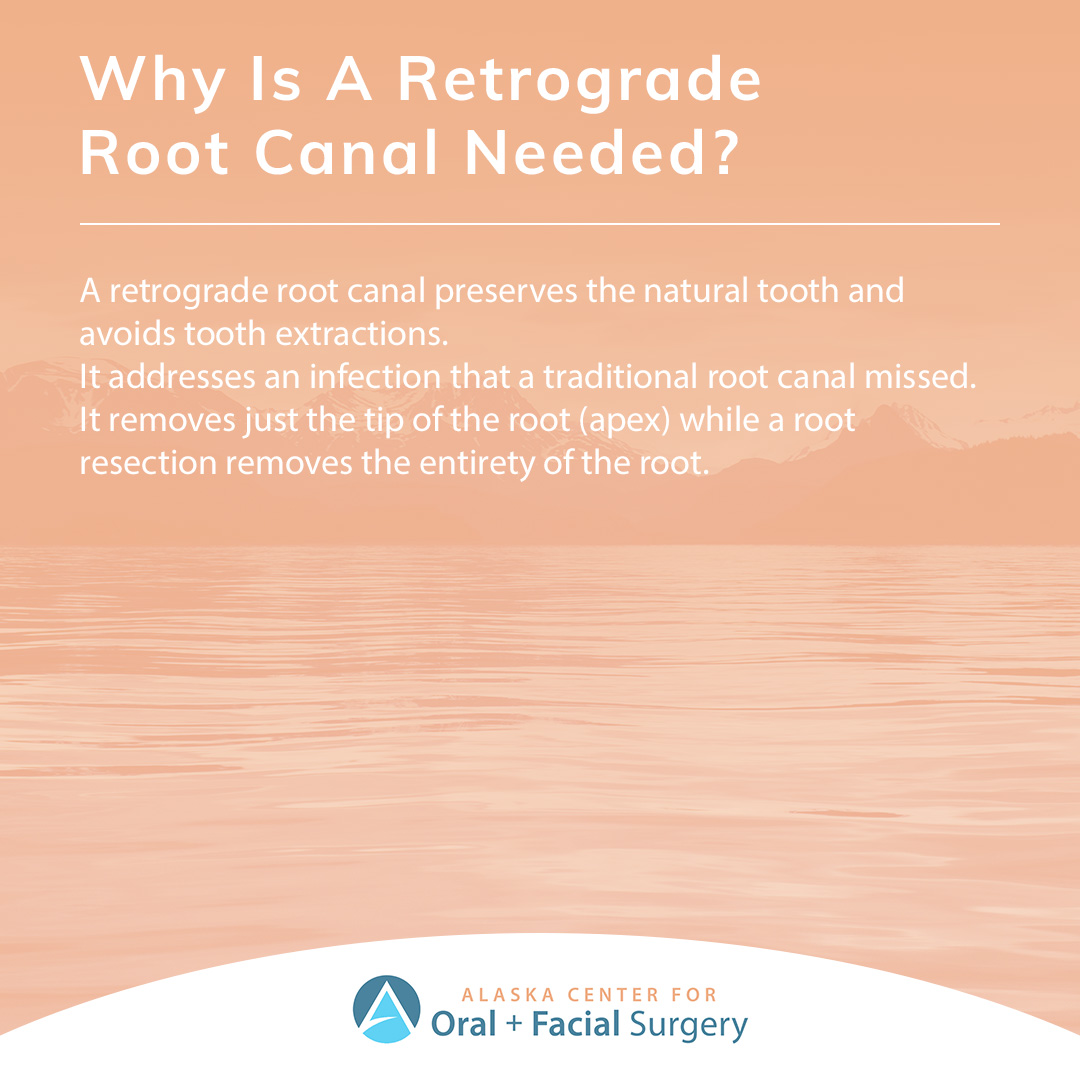 A retrograde root canal is done only after a traditional root canal has been performed on the same tooth. Many times, a second root canal can be performed before an apicectomy as a result of dental innovations and the ability to detect and remove all of the infection. An apicoectomy is typically the final procedure to preserve the tooth.

What’s the difference between an apicoectomy and root resection?

While these dental procedures are similar, an apicoectomy removes just the tip of the root while a root resection removes the entire root.

How A Retrograde Root Canal Is Performed

This is a common procedure and oral surgeon will cut and lift the gum away from the infected tooth for greater accessibility to the root. The infection will then be removed and the apex of the root is also removed and sealed with a filling. A dye will then be applied to ensure the tooth is not cracked or damaged. If the tooth is damaged, an extraction may be performed.

Roughly about three to four millimeters of the root is cleaned which typically requires special instruments such as a surgical microscope and ultrasonic device which lends to the improved retrograde root canal outcomes.

This procedure is a quick, outpatient procedure that can be done in a timeframe ranging from 30 to 90 minutes — with the front upper and lower teeth taking less time and molars taking more time. 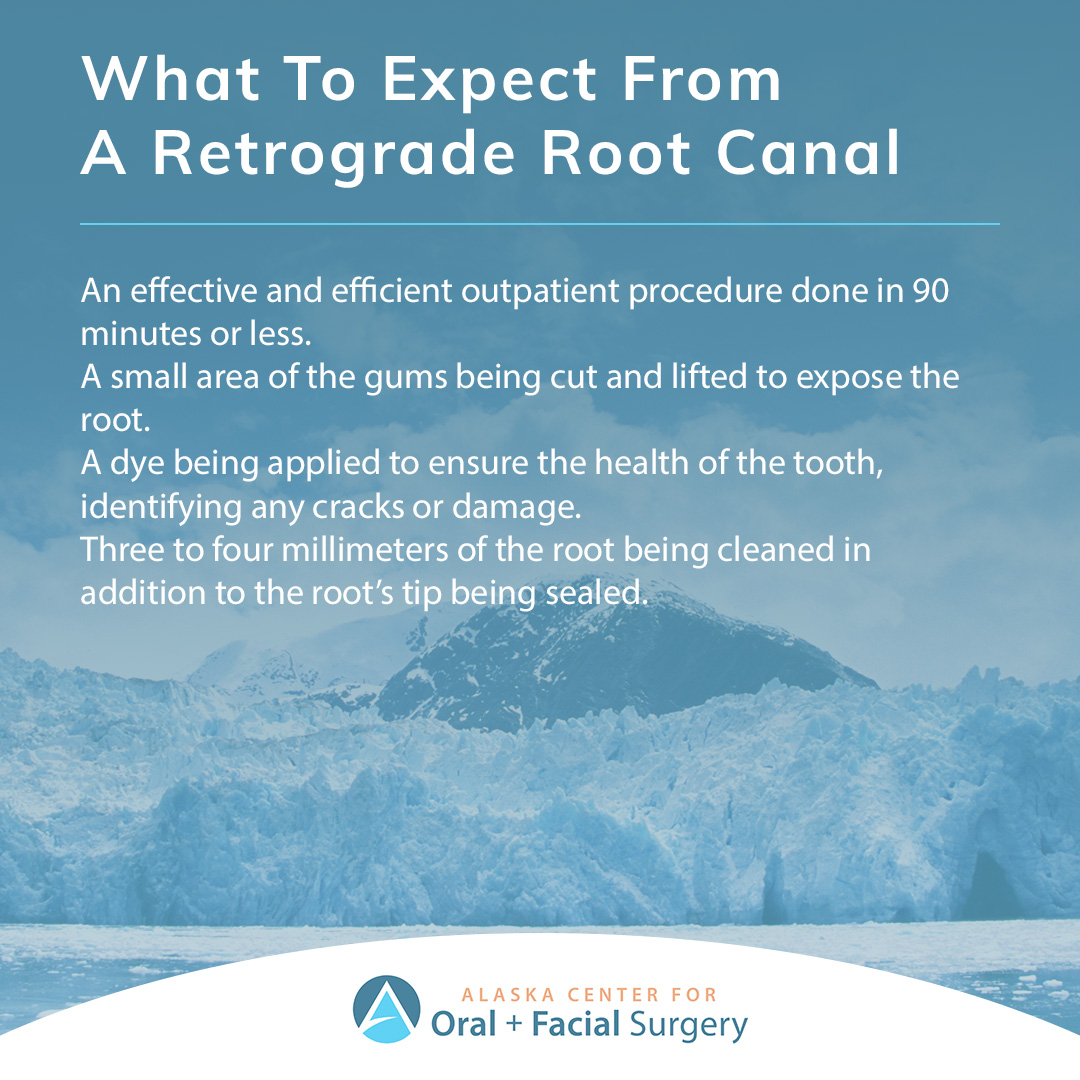 Do you need a retrograde root canal? 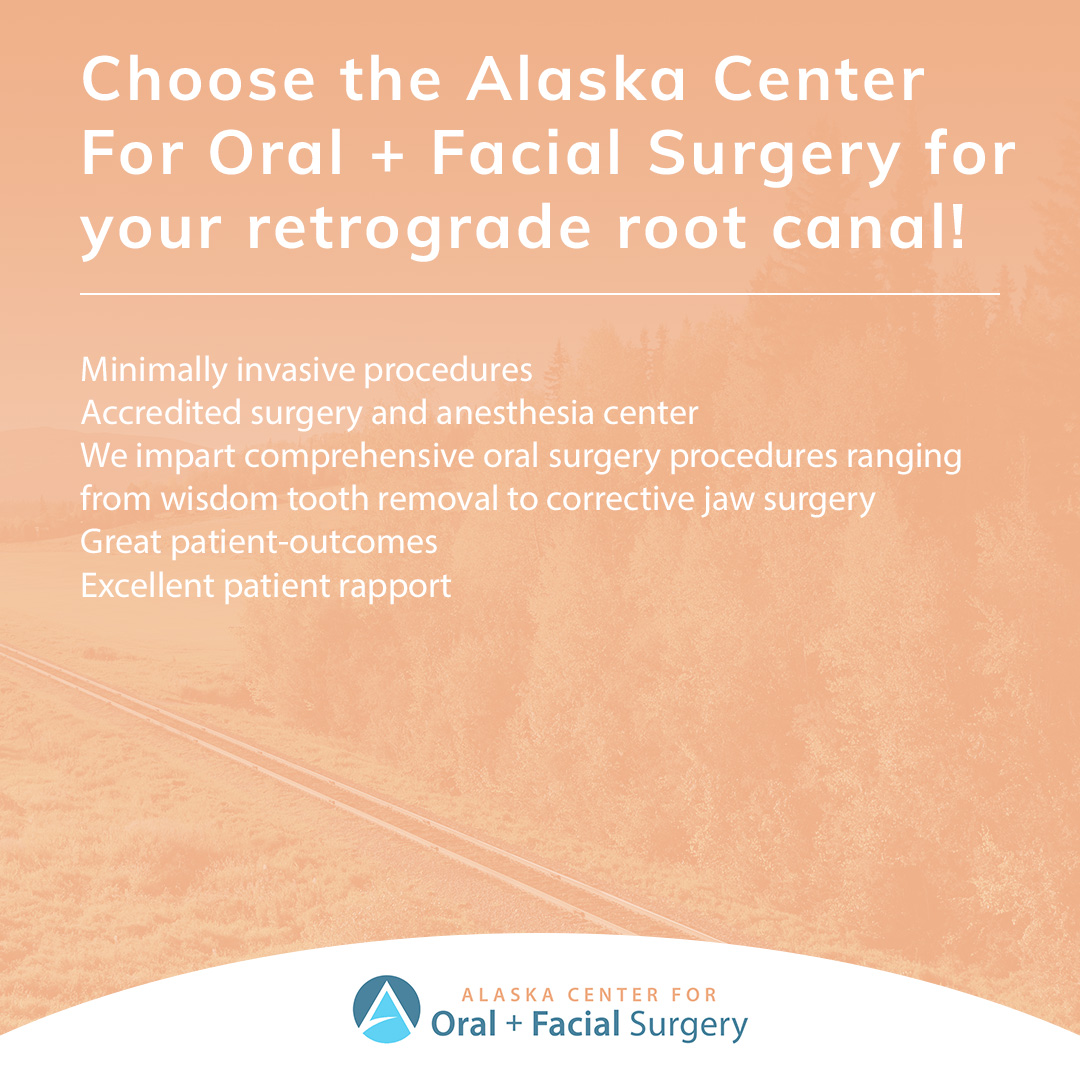 If you’ve had a root canal (or a couple) and are experiencing pain and swelling at the site, you may be a candidate for an apicectomy. For a diagnosis and treatment plan, schedule an appointment with us today!