“I really had been seriously exploring jaw surgery for pretty close to 10 years. I think I decided in the first five minutes when I met Dr. Nordstrom that I was going to do the surgery with him. He made it feel a lot easier than it had felt with other physicians that I have met with,” begins Dr. Larry D., an Alaska Center for Oral + Facial Surgery patient.

Larry had a significant underbite. His main complaints were that his front teeth didn’t come together and that they were being worn down. He had a LeFort I Osteotomy, which is where the upper jaw is moved forward to put it in the proper skeletal position.

Larry is a physician himself, a radiation oncologist, so he is familiar with the medical system and surgical processes. “I had looked into surgery multiple times,” says Larry. “I met with a number of surgeons and had cold feet about it until I met Dr. Nordstrom.”

When Larry had his consultation with Dr. Nordstrom, they discussed a lot of misconceptions related to the surgery. Some of these misconceptions Dr. Nordstrom dispelled are that if you undergo jaw surgery your jaw will be wired shut, you’ll be on a liquid diet for months, you’ll have incisions and scars on your face, or that you can’t do anything physically active for several months. These fallacies got Larry thinking about the timing of his surgery because he was going to lead a group of climbers up Mt. Kilimanjaro, including his 12-year-old daughter, in the near future. Could Larry have surgery and have enough time to recover and train to make it on this climb?

“I came into the office for my surgery, got checked in; and the next thing I knew, I was going into the surgical suite. Then I remember waking up after surgery. The whole thing was super-fast; very efficient, kind of in-and-out. I was shocked waking up at how alert I was, and within about 30 minutes, I was on my way home!” recalls Larry. By two weeks I was already back training, doing some cardio, and by four weeks I was back into full-training mode.”

Larry also mentions that having everything in one location was a really big factor for him. “There’s a surgery center right in Dr. Nordstrom’s office and I felt the pricing was very transparent,” Larry says. He added that the cost breakdown was very clear and he didn’t have questions about what he was going to get charged for anesthesia, the doctor’s professional fees, or any other fees associated with his procedure.

“I felt very comfortable with Dr. Nordstrom’s training and his demeanor. The whole process felt very easy to me,” says Larry. “My bite is now what it should be and my teeth are in the position that they should be. I’m totally happy that I did it!”

Precisely 12 weeks post-surgery, Larry and his daughter, along with a group of climbers, summited Mt. Kilimanjaro. “It was remarkable to stand at the top of Africa with her. It’s something I will cherish forever,” remembers Larry. 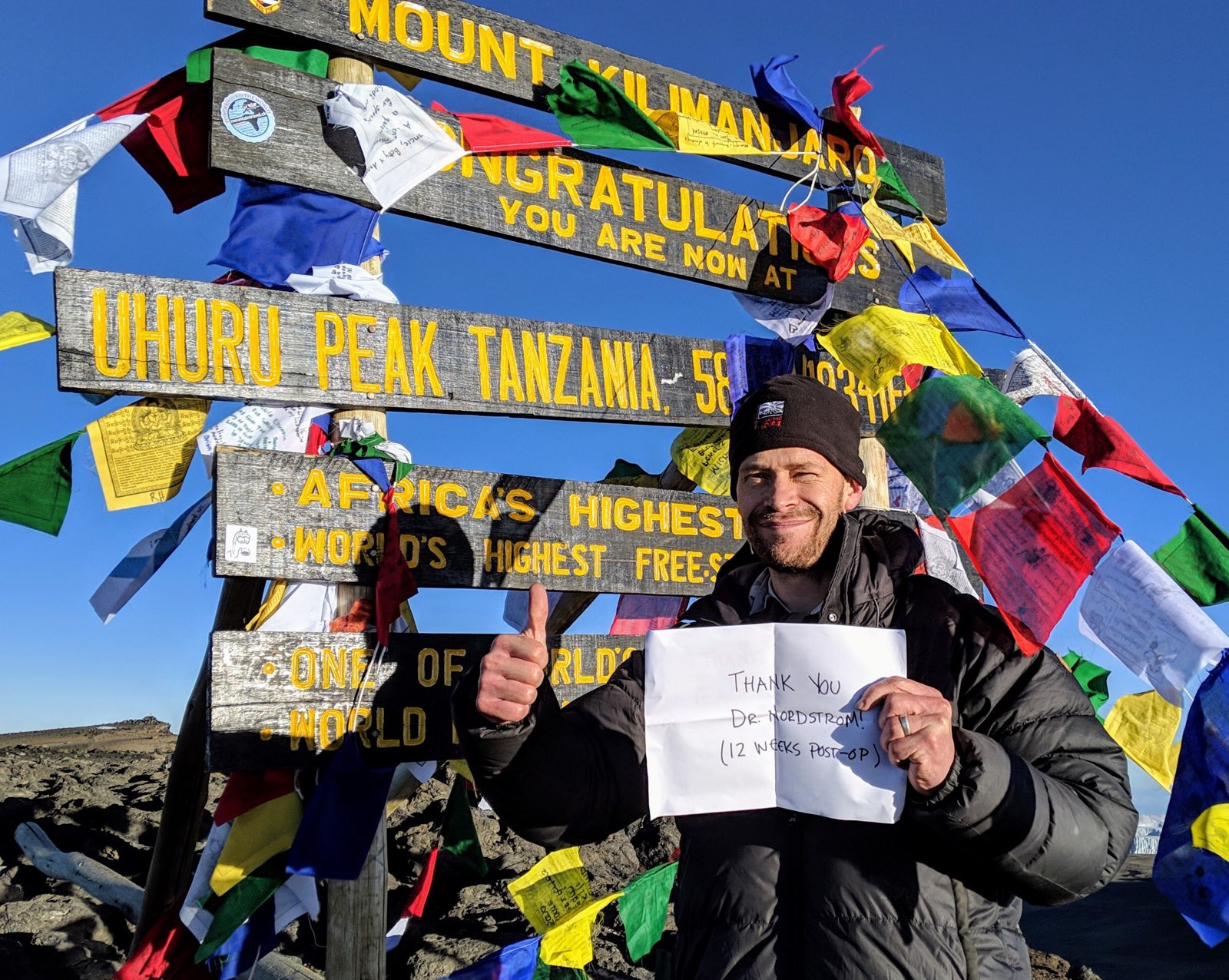